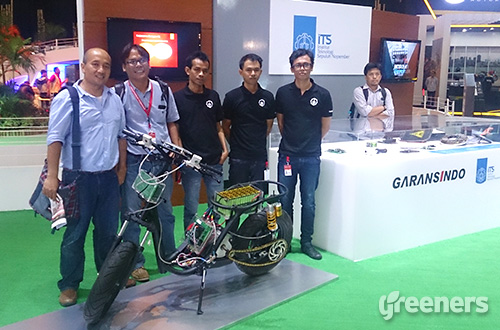 PT. Garansindo Inter Global, which cooperates with Sepuluh Nopember Institute of Technology (ITS) is preparing to enter the “battle” of electric motorcycle business in Indonesia.

President Director of Garansindo Inter Global, Muhammad al Abdullah or well-known as Memet states that in terms of infrastructure, the development of electric cars in Indonesia is still very far behind compared to other countries. However, for motorcycles or two-wheeled vehicles, there is no reason to be doubted because it is good enough especially in Indonesia.

“In the past, automatic scooter-type of motorcycle is also rarely used since people still doubted it. Nevertheless, they began to use it step by step. Indeed, we need to educate the product itself since it is not as easy as flipping hands. Thus, I think there are plenty of reasons for electric motorcycles to be developed further in the future, ” as he said when met by Greeners at the show of Indonesia International Motor Show (IIMS) 2015 at JIExpo, Jakarta, Monday (24/08). The development of motorcycles will still continue to evolve as it is explained by Memet as the reason behind Garansindo took ITS as a partner in this electric motor project. In addition, to develop electric motor products, ITS also cooperate with electric motorcycle company from the United States, Zero Motorcycles.

“So far, ITS is still concentrated on the research only. Now, we accompany them for the production. ITS is working with Zero and Italijet who have advanced in this industry before, so they should be confident about it. Thus, we challenge them to develop their technology and it must be able to enter the international market. It will be mass produced in 2018 when it’s ready,” he added.

Likewise, Chairman of ITS electric vehicles research team, Muhammad Nur Yuniarto, stated that motorcycles made by ITS does not require large electrical power. This is different from electric cars or other electric motorcycles made in foreign countries such as Zero Motorcycle. Electrical voltage required for this prototype of electric motorcycle made by ITS is between 90 to 100 volts and capable of producing 5 kW power. In full battery condition, this vehicle can travel a distance of 100 kilometers.

“There is no problem by using your electricity at home. It may need approximately 2 hours charge time for normal charging time. As for the quick charge is about 1 hour charge time, “explained this man who is also a lecturer in Faculty of Engineering of ITS. Nur admitted that electric motorcycles are currently not popular this country. Nevertheless, he optimistically believe that the Indonesians will get used to it and start using electric motorcycles in the next five years. “Because it’s new and we have to change people’s perception about this bike. Maybe in the next four or five years, people will begin to understand and use electric motorcycles, “he added.

For your information, ITS electric vehicles team is making a motorcycle prototype in collaboration with Garansindo. There are three types of electric motorcycles planned currently which are classic, scooter, and sport. One of its prototypes is exhibited in IIMS 2015 without using the body. Visitors can take a look of motorcycle chassis made of tubular material with dimensions of length 1904 millimeters, 687 mm width, and 1,086 mm height. The power source comes from a 5 kW peak electric motor powered by a 97.2-volt Lithium Ion battery. The design of this motor is developed by Italijet, electric motorcycle brand from Bologna, Italy.