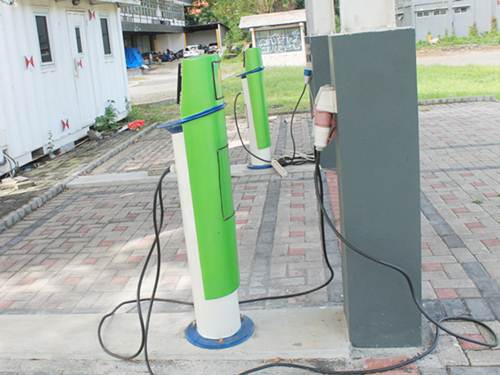 All started from the beginning of research until the launch of electric motorcycle on (2/5) ago. Booked 5000 units by PT. Telkom and 10.000 units by Kamar Dagang dan Industri (Kadin) Bali, it is stated that electric motorcycle are increasingly popular. The latest findings on utilizing electricity as an alternative energy made the research team of Mobil Listrik Nasional (Molina) ITS took the initiative to make electric based station.

The structure of an electric based station is the same as a gas station building in general. The tube itself is a metering system, calculating the amount of electricity that flows in the vehicle. “It’s just that there are some other components such as solar panels, batteries, controllers, inverters, and so forth,” said by this man who still taking the Master Degree of Mechanical Engineering.

The real shape of this electric based station can be seen directly at the Molina research center. With the capacity of charging three electric vehicles simultaneously for one unit in this station, this kind of energy becomes environmentally friendly because it does not generate air pollution. “Obviously when it is associated with cost issues, it will likely cheaper than general fuel because there are alternative energy sources used to supply electricity itself,” said by this who born in Malang.

Grangsang added,  this electric based station will be propagated later with a portable system or can be charged with an existing socket-powered electricity at home. “The deployment of electric based station itself still required a further study and we hope that we can get support from Indonesian citizen on this one,” as he concluded. (ifa / pus)