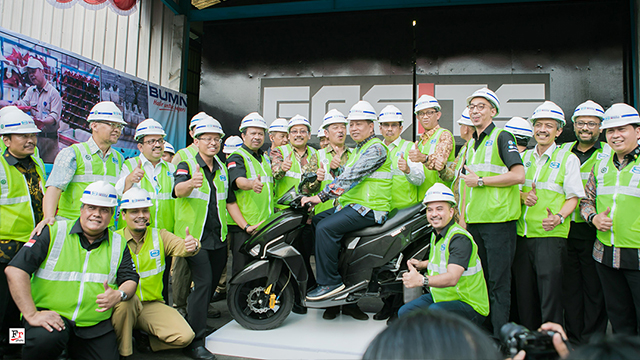 Bogor (Greeners) – The signing of cooperation agreement on electric motorcycle GESITS (Garansindo Electric Scooter ITS)  has been done on Friday (18/8), in Wijaya Karya (WIKA) industrial area located in Cileungsi, Bogor, West Java. This agreement between PT. WIKA Industrial and Construction, Sepuluh Nopember Institute of Technology (ITS), and PT GESITS Technologies Indo (GTI) which belongs to Garansindo Group, marking a new history for the achievement of vehicle innovation from our children of nation.

The signing itself performed by each party’s representative which are the President Director of PT. WIKA Industrial and Construction named Fery Hendriyanto, Chancellor of ITS named Prof. Ir. Joni Hermana, M.Sc.ES. Ph.D., and President Director of PT GTI named Harun Sech. It also witnessed by the Minister of Research, Technology, and Higher Education named Mohamad Nasir, Chief Executive Officer (CEO) of Garansindo Group named Muhammad Al Abdullah and the invitees from several ministries and media.

“This co-op of industrialization in electric motorcycle GESITS is a real contribution from PT. WIKA as a company dedicated to contribute to the development of the nation,” said Fery Hendriyanto as quoted by a press release received by Greeners, Wednesday (23/08).

Fery added that PT. WIKA has prepared industrial facilities and equipment to support the GESITS production process in perfect way in which it has been created by Indonesian students inside the country itself.

GESITS electric motorcycle was created and developed by student groups of ITS in their campus in Surabaya, East Java, accompanied by Garansindo Group. Surprisingly, this innovation is built through in-depth research by considering its benefits as a reliable mobility tool, aligned with global needs and developments. It includes the efficiency of energy and environmentally friendly system for global community.

Supported by Kemenristekdikti, the GESITS prototype project has successfully undergone road trials and extreme performance from Jakarta to Bali. In addition, this development project also involves small and medium industries (IKM) in the manufacture of key components through start-up programs, such as electric motors, battery management system (BMS) and battery packs, controllers, chassis , and body.

“We need to work together to build our competitiveness in the reliable electric-based vehicle industry. Our partnership with PT. WIKA and Garansindo is a momentum to move other elements in our nation for the achievement of domestic vehicle products based on future technology, “said Joni Hermana.

The same thing is also delivered by Muhammad Al Abdullah as chairman of Garansindo Group, a national private company that plays an important role in giving birth to GESITS.

“The GESITS project is part of Garansindo’s responsibility and mission as a national private company of Indonesia. From the beginning, we did not want GESITS to be a concept only without further development. It is time for Indonesia to show the capability and independence in matter of vehicle design technology, especially the two-wheeled vehicles that currently become the core of economic driving force of most Indonesian people, “said Al.

GESITS assembling plant itself will occupy one of the buildings in the integrated industrial area of PT. WIKA (Persero) which has a total area of 30 hectares. In the early stage, the plant will use one of the 2,400 square meter buildings as a component reception facility, vehicle assembling, and final testing. Thus, the production results will be accommodated in a temporary storage area of 1400 square meters.

In the early stages, the plant established by PT. WIKA is able to produce 50,000 units of GESITS per year. In the future, the production capacity will be expanded to reach 100,000 units per year. The production process of this electric motor is planned to begin in the following year. 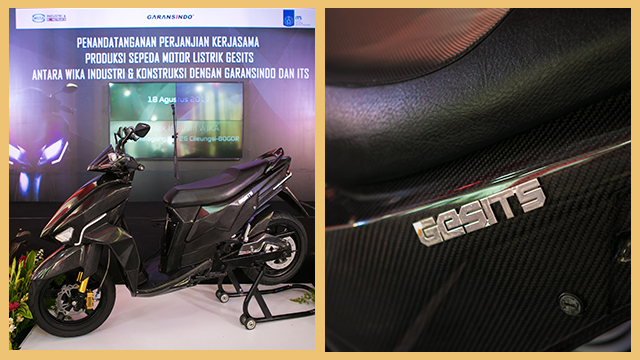