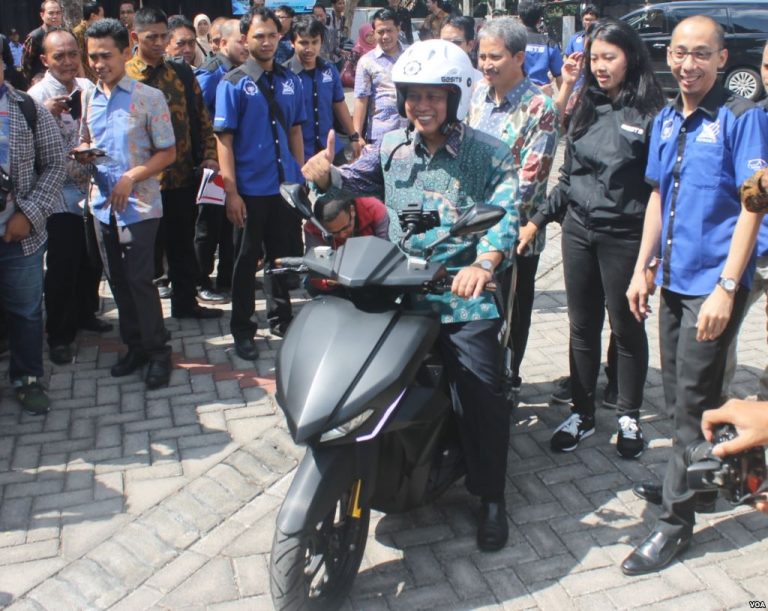 Jakarta (ANTARA News) – Minister of Research and Technology, Mohamad Nasir, said, “Gesits or Garansindo Electrical Scooter ITS, which is the result of a collaboration between PT Garasindo and ITS, will become the “leader” of electric motors in Indonesia and even in ASEAN.” “At least, we are well prepared and mastered the technology. Moreover, if Gesits available as soon as possible in our society, then it will be the only one in Indonesia and surely lead the beginning of electric vehicle here,” as he said during the Gesits prototype submission at ITS Molina Workshop in Surabaya on Tuesday. He also got a chance to try Gesits by circling the trial field at Molina Workshop accompanied by ITS chancellor Prof. Ir Joni Hermana MSc ES PhD, Managing Director of Garansindo Group Muhammad Al Abdullah, and Chairman of National Electric Car Laboratory of ITS Muhammad Nur Yuniarto. “This motorcycle is targeted to be mass produced in 2017 so our society could feel the new atmosphere of electric motorcycle. Later, I will help the certification from BPPT and design approval with SNI and BSNI because both of them  are under the jurisdiction of Ministry of Research and Technology. Gesits should be able to displace conventional motorcycle,” he said. Therefore, the Minister of Research and Technology suggested that ITS establish “Holding University” which will become a business institution for educational institutions with research resources coming from the researchers themselves. “If the results of ITS research have led to innovations that are ready to be produced commercially, I hope they can form Holding University,” he said.

However, he reminded that “Holding University” can only be done by  Perguruan Tinggi Berbadan Hukum (PTN-BH), which only available for few state universities, such as ITS, Unair, UGM, ITB, UI, and so on. Responding to the challenge of Minister of Research and Technology for “Holding University”, chancellor of ITS Prof. Ir Joni Hermana MSc ES PhD admitted that he had discussed the plan with Majelis Wali Amanah (MWA) after ITS was set to become PTN-BH. “So, we are actually ready on it. We even have prepared human resources to get there. We will free up 20 percent quota for alumni of ITS Bachelor Degree to get higher education in Master Degree,” he said. Meanwhile, Garansindo Group Managing Director Muhammad Al Abdullah acknowledged that Garansindo wants to realize the children of nation’s invention by helping them produce this project so it will not only become a dream. “That’s why I feel very proud as we challenge ITS to create an electric motorcycle with its own components. They able to prove it though,” he said. He added, “Therefore, Garansindo will also act seriously. With the prototype of Gesits in hand, we will process it directly for manufacturing and infrastructure in order to realize the mass production of electric motors by the end of 2017 or early 2018.” He also said, “We are very optimistic in this product because we will overcome the limited electricity by charging system on the house of residents, modern stalls, gas stations, and so forth as we exchange LPG tubes in general” he said.

Likewise, Chairman of National Electric Car Laboratory of ITS Muhammad Nur Yuniarto guaranteed that the benefits of “Gesits” is more reliable compared to similar vehicles produced by other countries. “We surely can guarantee it because the price of our electric motor would be cheaper that is Rp15 million to Rp 20 million per unit since it used components from local materials, while other products cost ten times higher,” he said. In addition, the quality of the motorcycle is also better. “We will use two battery systems, the first is charging system with 1.5 hours to 2 hours charge for 80-100 kilometers distance. The second one is exchange system just like we do usually on LPG. In order to monitor the speed, we can use Android phone that is connected to speedometer via Bluetooth,” he said.

This electric motorcycle designed as automatic scooter-type with dimension of 1,904 x 687 x 1,086 mm (PxLxT). The wheel used is 14 inches and is equipped by front rear disc brakes. The battery has a capacity of 1980 Wh with a maximum discharge of 61.2 Ampere. During the visit to ITS, the Minister of Research and Technology also presented several units of CNC machines to the Regents of Situbondo, Tuban, Banyuwangi, and Magetan in ITS Robotics Building. Then, he went to National Ship Design and Engineering Center (Nasdec) to see some products of their works, such as warships.