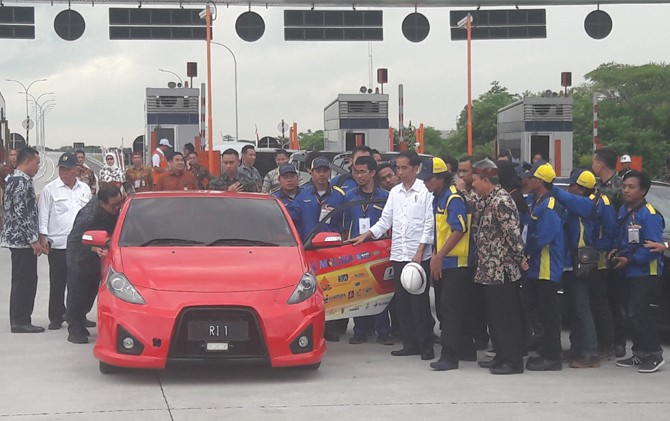 December 19, 2017 is a monumental date for the people of Indonesia, especially for those who live on the Java island. This is because the Surabaya-Mojokerto Highway ( Sumo Highway) was officially announced and opened to the public after a long waiting period of 23 years since this highway is planned.  For your information, the highway itself has been planned since August 19, 1994. At that time, the letter of agreement to build the Sumo Highway has been done by PT. Marga Nujyasmo Agung (PT MNA). However, in September 1997, this project was finally stopped due to the monetary crisis (Keppres No.39 / 1997). Then in April 2002, PT. MNA can finally resume the Sumo Highway construction through Presidential Decree no. 15 of 2002 on the revocation of Presidential Decree no. 39 of 1997. 4 years later, a new highway concession agreement (PPJT) was signed which resulted on the IA section that is built in April 2007. Then finally it is opened yesterday on December 19, 2017 by Jokowi himself which includes section IB Sepanjang -WRR (4.3 KM), section II WRR-Driyorejo (5.1 Km), and section III Driyorejo-Krian (6.1 Km).

Likewise, Jokowi also got the opportunity to try the performance of electric cars made by ITS students named Ezzy II. In addition, some electric cars made by ITS will also be displayed at the site which are Lowo Ireng supercar, two units of electric motor Gesits, and one unit of solar and electric-powered buses. According to one of the team of ITS electric car engineers, Ayuning Fitri Desanti, these vehicles have been tested for the last two nights and ready for use during the announcement of the Sumo Highway. However, until the morning of December 19, 2017, ITS electric car team has not got certainty whether President Jokowi will ride Ezzy II or not. The information is still unclear. The Presidential Protocol Team and Presidential Security Force (Paspampres) still discussed the pros and cons. Until 10.00 A.M., Ministry of Public Works and Housing , Mr. Basuki Hadimulyono, tried to test drive the Ezzy II by spinning around Sumo Highway that will be announced shortly. He also reportedly called someone and said that the car is safe to ride. After that, the team get the orders to raise the car onto the highway and put the RI-1 plate on the car.

Not long after, the number 1 person in Indonesia finally came. ITS electric car team felt proud and touched because Jokowi finally agreed to ride Ezzy II car. Accompanied by the car’s engineer, Jokowi occupied the front seat of the electric car that dominated by the color of red. The car then went around and 10 minutes later it came out again from Warugunung Highway gate. He said, “I have not been able to comment much since we still driving for only 20 kilometers.” According to him, the car is still shaking as the driver moves the gears to get to higher speeds. ” I still can felt the shake when the gears changed. It’s like gleg…gleg,” he said with a smile. Nevertheless, he confidently said that he will support the mass production for this car in the future. The government, he continued, will encourage any domestic products, to be mass-produced and accessible to the market. “It is a long and difficult way, but the government will continue to encourage research products made by children of our nation,” he said.

This second-generation electric car made by ITS electric car team that has a battery power of 20 kWh with a capability of 130 km distance is officially the first electric car in Indonesia that is used by the president to test the recently announced highway. Dr. Muhammad Nur Yuniarto as the leader of the electric car project is admitted that he is very proud and happy to see such occassion. In his article written on the Kumparan, he thanked Jokowi deeply for his courage to ride a car that still given the status of prototype. He also stressed that the information and progress of this car’s development will continue to be reported to the government so that it can be further acted upon. Furthermore, his future plan stands on the making of electric cars for Jokowi to be used as an official car.

Related to the issue of commercialization, Jokowi explains that although the challenges will be very difficult, the government will be pleased to help overcome all of them for sake of electric car made by our children of nation. This is a giant step to introduce electric cars to the industry. Laws and regulations are in the process of review so that this car can be used by the people when it is ready. Nevertheless, the electric car team here also admitted that there is still much to be addressed. Jokowi said that the deficiency is something reasonable in a research. It is similar with the development of electric cars in other countries which resulted many “homeworks” to do. The car itself must meet the standardization that has been set so it will be safe for consumers. “It is not easy, because it needs a lot of standardization, such as emission test and et cetera,” he explained. However, all parties concerned with this project understand that with the full support from government, electric vehicles will soon be realized and compete in the industry with other conventional vehicles. Therefore, we as the potential customers should also be able to appreciate and support all these struggles coming from our local production so it can be sold respectively in the Indonesian market. Our market.