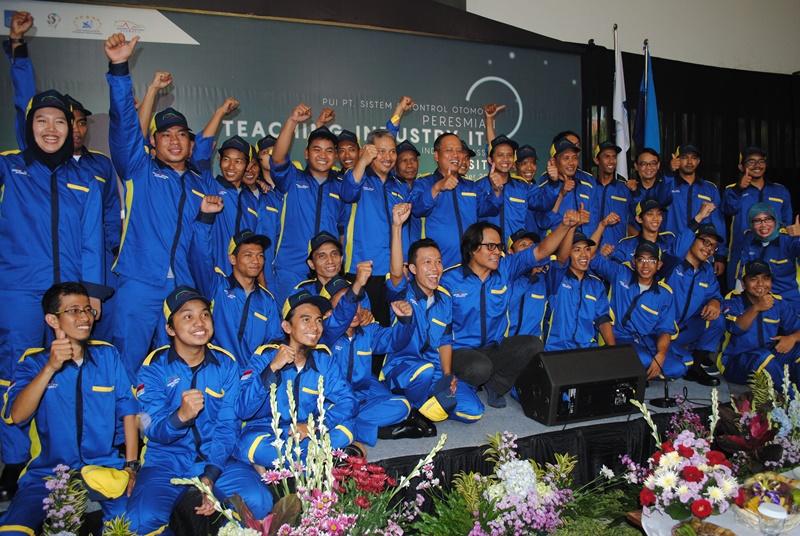 A giant step to realizing our own nation’s electric motorcycle has been officially announced on December 15, 2017 in the National Electric Car Building owned by PUI-SKO ITS. ITS Teaching Industry is the name of that memorial step. Yes, that’s right, memorial. Because the event itself can be the one of several core steps for the people of Indonesia to be able to participate in preserving our beloved earth. It is not a surprised that electric-powered vehicles are a solution to reduce the emissions created from fossil fuels in conventional vehicles. The problem is that until this moment there has been no electric motorcycle nor electric cars owned by Indonesia that are ready to be launched in mass production. Similarly, the regulations and supports are still less from several parties in our country.

Therefore, the establishment of ITS Teaching Industry is a real form of struggle to realize the things mentioned above. The event was attended by various parties such as Minister of Research, Technology, and Higher Education (Menristekdikti), chancellor of ITS, representatives from various institutions related to the event itself, and some national media. They were welcomed by a team from PUI-SKO ITS. Then, the opening ceremony began with a speech given by Muhammad Nasir as the Minister of Research and Technology. Here, he explained that ITS Teaching Industry is one of the research activities funded by the Ministry of Research, Technology and Higher Education (Kemristekdikti) with the aim to bring the problem of industrial competence into the university and bring the researchers’ research progress in university to industry. “The output of Teaching Industry activities conducted by researchers of PUI-SKO ITS here is to realize the assembly line to support the mass production plan of electric motorcycle,” as he insisted.

The electric motorcycle mentioned above is obviously GESITS. As we have seen, GESITS is an innovation product made by ITS through Pusat Unggulan Iptek-Sistem Kontrol Otomotif (PUI-SKO) and Garansindo. Previously, GESITS has been introduced by Kemenristekdikti to the people of Indonesia since the Year 2015 at the event of International Indonesia Motor Show (IIMS) 2015 held in Jakarta. According to Muhammad Nasir, the assembly line for GESITS designed by PUI-SKO ITS engineers is conceptualized in a modular assembly line that fits perfectly with educational concepts where the configuration can be changed as needed. “The real use of Teaching Industry’s assembly line here is that the industries will be able to conduct studies or planning by using this assembly line in ITS before implement them to their own assembly line,” he said. In addition, this tool can also be used for training activities in order to prepare human resources that will work in the electric motorcycle assembling industry of Indonesia.

Muhammad Nasir also asserted that an innovation product can not be said innovation if it is not mass-produced and used for the needs of society. Therefore, he explained that Kemenristekdikti already coordinate with other ministries such as the Ministry of Transportation and the Ministry of Industry so that the licensing and trial process can be finished as soon as possible. Plus, there will be more researchs to produce innovations like GESITS. The purpose of plan is to educate the public that universities are beginning to be passionate in developing innovation. “The research costs are high but this will have a good impact for the people of Indonesia. The results of research should not just stop in the library, but they must be showed in real form to the community, “he said.

Answering the question from Muhammad Nasir above, Director of Operations of PT. Wijaya Karya Industry and Construction (PT. WIKA), Oksarlidadi Arifin revealed that his parties targeted the second semester of 2018 to produce 50,000 GESITS electric motorcycle and it will be followed by 100,000 GESITS production in the year after. “Up to now, there are already 37,000 orders where 50% of them coming from various corporation, and the rest are individuals that do the ordering process through Garansindo,” he stressed. Related to the problem of GESITS’ battery, Oksarlidadi added that the citizen should not worry if it runs out of battery because his parties already cooperate with Pertamina and PLN. “There will be a battery exchange at every gas station in Jabodetabek and other big cities,” he extended. Similarly, the selling price of this innovation, Chief Operating Officer Garansindo Harun Sjech said that it will be sold at an affordable price. “The price of GESITS electric motor is about IDR 15-17 million,” he said.

Finally, the conclusion of this event was delivered at the end of the session in form of press conference. All parties concerned with this innovation want a support from the government and society so that the steps that they have been built up to this moment is not gone with the wind. They want it to be the wind of change for Indonesia. Director of PUI-SKO ITS, Dr. Muhammad Nur Yuniarto, stressed that our society still often doubted the ability of local products. “If Ferrari makes a billion dollar cars, people buy it instantly without looking at the price. Contradictory, if we make a bike at a price of up to 20 million, they still negotiate it so they can have cheaper price,” he emphasized. Such a mindset should be changed according to him. This is because the role of the citizen as a buyer of local products is the most important because in the end all the products of our children of nation is intended for its own people. If there is no support from the government and the people themselves, who else will raise the degree of our local products. Therefore, the parties concerned for this innovation will keep continue to innovate while waiting for clear regulation and strong support from the government and people of Indonesia so that our local products can compete in the international scale.