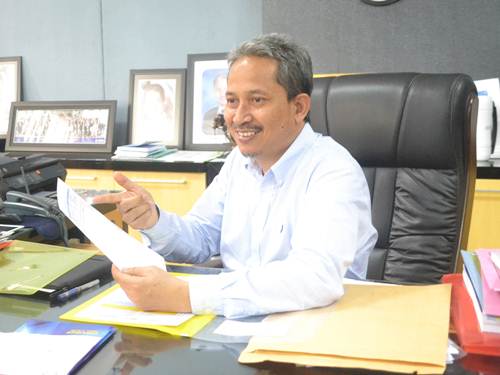 After being launched by the Minister of Research, Technology and Higher Education (Menristekdikti) Prof. M Nasir earlier this month, GESITS electric scooter motorcycle (Garansindo Electric Scooter ITS) invented by ITS Surabaya and produced by PT Garansindo Inter Global attracted many parties especially from local company. One of them is PT. Telekomunikasi Indonesia (Telkom) which directly ordered 5,000 units.

This was revealed by Consumer Director of Telkom Indonesia, Dian Rahmawan, during a meeting with chancellor of ITS, Prof. Ir Joni Hermana, MSc.ES, PhD, in the chancellor office of ITS recently. Telkom explained several reasons why they chose this electric motorcycle produced by ITS.

Among those reasons, the main purpose of this transaction is because GESITS is expected to further improve the productivity of Indihome technicians team, so that they can give better services. Also, they believe that it can provide excellent safety procedure. “We have a lot of Indihome network technicians and they need a vehicle with specifications like GESITS,” said Dian.

For the future, Telkom requested some modifications to this electric motorcycle that allows technicians to bring safety tools in the trunk of the motor. “With an electric motorcycle, we can be more environmentally friendly since it produce less pollution and indeed a cost-saver for all of us,” said this alumnus of ITS Electrical Engineering.

In order to ensure the product he ordered, this man who is familiarly called as DR was immediately made a visit to the location of manufacture of GESITS located in Molina Research Facility of ITS. Related to the event, Joni Hermana expressed his gratitude towards Telkom for giving their trust to ITS by ordering 5,000 units of electric motorcycle.

Joni explained that this large quantity of transaction can strengthen Indonesia’s economic position and welfare to be an independent nation.

“I as the chancellor of ITS is very pleased with the GESITS’ booking by PT. Telkom because it shows that the product already gained the trust of  highest class consumer,” he said proudly. “And of course, it will bring a positive impact towards researchers and other producers in the country,” as he concluded.

As it is known, GESITS electric motorcycle is the manifestation of research result conducted by ITS and proclaimed by Kemenristekdikti. It is intended to utilizing the benefits from research results invented by higher education institutions for the society through mass production and commercialization.

Electric motorcycle developed by ITS is prepared to compete with other oil-based automatic motorcycles in the market, therefore it has the same speed as them that can reach 100 km per hour. Interestingly, GESITS is almost 100 percent produced by local materials unless its battery that is still imported from other country. (ifa / pus)