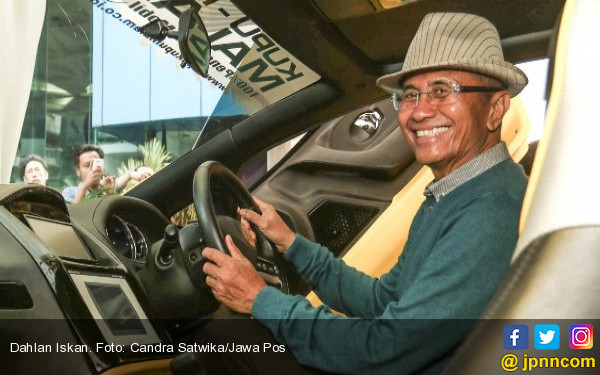 Dahlan Iskan, one of the public figures in Indonesia who strongly supports the development of electric cars Indonesia, recently published an article that contains his opinion on the future of national electric car industry. He stressed that the hope on that matter is still wide open thanks to special person named Nur. Related to the question of who this special person is, Dahlan Iskan started his opinion with the achievement of one of the best universities in Indonesia namely Sepuluh Nopember Institute of Technology aka ITS Surabaya. Indeed, ITS Surabaya is the actual opener of national electric car.

He said that previously, there was Mario Rivaldo from Bandung who made electric vehicles five years ago. Already tested everywhere. But never entered the commercial market. Precisely, it is not yet permitted. Similarly, there are numbers of electric motors on the market, but can not be called as a national vehicle yet. However, ITS is the one that actually signed the commercial contract of electric vehicle production. Cooperation between ITS and PT. Garansindo resulted in GESITS, the first electric motor scooter in the history of Indonesia that already commercialized and it is the result of the hard work of ITS research team in the field of national electric vehicle.

Here, Dahlan Iskan informed that it is achieved through the leadership role of a doctorate in ITS named Muhammad Nur Yuniarto who received full support from his chancellor, Prof. Dr. Ir Joni Hermana MSc. Nur, in another language, means light. Dahlan Iskan asserted that the “light” is indeed visible from Dr. Nur on this one. It can be seen from his book that will be published entitled “Kendaraan Listrik: Teknologi untuk Bangsa” in which the introduction is written directly by him at the request of Dr. Nur too. He added that Dr. Nur came to his home regarding the matter itself with the well-known team of ITS (Surabaya Institute of Technology) electric vehicles: Alief Wikarta who became his representative on the team, Indra Sidharta, Grangsang Setyaramadhani, Uta Nugraha Yoga, Agus Mukhlisin, Albertus Putra, and Affan Fakhrudin.

According to Dahlan Iskan, Dr. Nur is a unique person. He looks like a rocker, his shirt is so “bad-ass”, and his hair is long. It amazed him because behind all that, Dr. Nur is a graduate of Manchester, England. Before leaving for England, he asserted that Dr. Nur married his girlfriend named Febrine Wulan Widyasari, then took him to Manchester. His first child was born there. Two other children were born in Surabaya. Another interesting stuff is that Dr. Nur was not a doctor of electrical engineering. His bachelor degree is indeed achieved in ITS, but majoring in engineering techniques. His doctorate from Manchester was also mechanical engineering. Nevertheless, his struggle for electric cars is amazing. He is the leader of the ITS electric vehicles team which is one of many excellent ITS flagship programs.

ITS electric vehicles team has now registered 10 patents. And prepared to register more which is 130. All in the field of electric vehicles. All of that can be achieved because this team is working in unorthodox way. They work in the lab and workshop both day and night. ITS is indeed setting up buildings and equipment for them. They even hold the key of the building themselves. The building itself can open and close in any day at any time, no restricted rules regarding this. It even rarely closed as it said by Dahlan Iskan. He tried to get there on Sunday and it was still open and there were some people still working. Remarkably, Dr. Nur is almost always with the team members. It is indistinguishable between the student and the lecturer. The clothes and the attitude. The works as well as the hassles. He is like a friend to students. Lecturer and friend. Father and child. Brother and sister. In short, this is the key of  success from the team.

Dahlan Iskan admitted that he once asked Dr. Nur about becoming a professor and he replied, ” I don’t have any thoughts to go that way.” Every time he intended to write scientific papers, he always invited by the students to the workshop from day to night. But, he was satisfied with his role like that. He gained happiness through it. Indeed, he knows that the perks of being professor is quite tempting since it provides reasonable salary with additional income Rp 25 million a month. But, he doesn’t want to be a professor with such a motive. Moreover, after becoming a professor, it may stop you from giving scholarly contributions and works. Well, it’s an interesting attitude coming from humble man like him.

Dr. Nur was born in Grebek Village far from Purworejo, Central Java. After finishing school at SMAN 1 Purworejo, he got two choices: Machine Major of ITB or ITS. He did not choose UGM as the closer university from his home because his family had once failed there before, so he was afraid that the same thing would happen. However, ITS received him and he achieved the title of best graduates at the year of 1997. His hobby is in line with what he doing right now which is “speeding” with a motorcycle. Speeding is what makes him familiar with students in general and the doer of speeding itself in particular. Then, when they become the workshop specialist and mechanic, Dr. Nur is taken to become the leader of the gang. Those people coming regardless their faculty. They come from any faculty such as electrical engineering, machinery, and industrial engineering. Therefore, the team of  ITS electric vehicles are consist of various type of people. For example, one of them is a student of mechanical engineering named Yoga who already succeeded in making the motor components. Then, the one from electrical engineering can make a controller. In addition, they even manufactured a BMS (battery management system) which include assembling the battery into one “ready to use” system. Those  three are the main components of electric vehicles.

In the form of vehicles, this team has given birth to a product that is ready to be commercialized in shape of a motorcycle. Its name is GESITS. There is “ITS” in its last three letters. Dahlan Iskan told that he had seen this motorcycle when he invited the teachers of SMK Pesantren Sabilil Muttaqin Takeran, Magetan, to study on ITS team. This school, that is run by his family, wants to make its own electric motorcycles and indeed it must be learned from the GESITS project that is ready to be mass produced in 2018. As described above, PT. Garansindo is the one who will make that happen. Luckily, the owner of Garansindo is an alumnus of ITS as well. They have been very detailed in discussion and the contract have been made as well so that the production process is being worked by both parties.

Here, Dahlan Iskan also confirmed that Dr. Nur’s book mentioned above is not intended to achieve the title of professor and it is guaranteed that the book are scientifically proven. Dr. Nur has a motive that is greater than the degree of achievement. His main motive is to encourage, guide, and enlighten all of those who concerned about the development of electric cars. Dr. Nur sees that the government is taken the matter of national electric car seriously. In addition, he also writes his overall view of good and bad, challenges, and chances of this event. Indeed, it is actually the government that can realize all of it. Let’s not talk about facilities or incentives first because according to Dahlan Iskan, the government needs to give clear rules and not complicated at all first in this kind of matter. That will be enough so that no one will be considered violating the rules by creating and realizing the electric car itself. It is because electric car is the real solution of energy efficiency both on national and global event according to him.

Dr. Nur asserted in his book that actually, buying fuel for the car is extremely wasteful. Of the 100 percent fuel, only 1 percent is directly used to move the wheels. The rest is not directly moving the wheel. That is one of the few facts about motor vehicles that exist today. The rest, according to Dahlan Iskan, can be purchased and viewed on Dr. Nur’s book who has been commercialized to the public because it is explained clearly there. Or, in the words of Ricky Elson: If there is no national industry, graduates of engineering faculty will never do engineering work. Their main job is simply reading and analyzing catalogs. This is because all products are imported so that their required ability is to read other people’s product catalogs.

Reading the book of Dr. Nur here, we can understand the “A to Z” regarding the issue of electric cars in Indonesia. In conclusion, Dahlan Iskan congratulates Dr. Nur Yuniarto and ITS Electric Vehicles Team as well as Indonesia because after this, the country will have their own national electric vehicles. Those have been achieved through great sacrifice and dedication. Only support and assistance from all parties are needed to advanced this great work. This is because it is the final stage of the long journey of making this national electric vehicles.