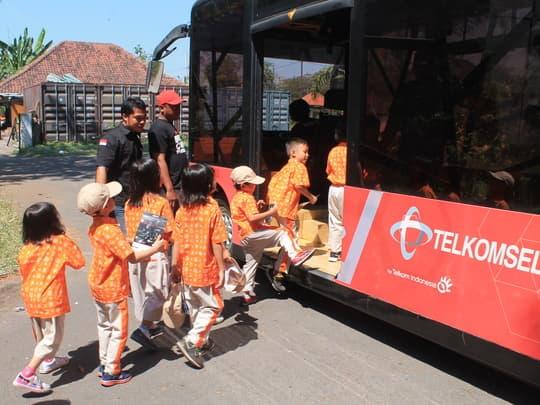 The presentation on the importance of education in electric vehicles since early stage of life has been done by the research team PUI-SKO ITS through a series of events related to ITS Eco Campus. One of them is addressed to the first graders of elementary school. These kids looked very excited when the team introduced their work one by one. Cheerfully, they listened to an explanation from one of the members of PUI-SKO ITS Team, Muhammad Fikri Fakhresy. According to Fakhrezi, explaining electric vehicles to elementary school children is a challenging job. “It should be delivered in slow phase to give directions to them, using simple language as much as possible to be well received, but overall it is all exciting,” he said.

This cross-path student from the Department of Physical Engineering Department of 2013 stated that he was happy with the enthusiasm of the participants. “As a first grader of elementary school, I think their knowledge is quite extensive, some of them already know about electric vehicles to solar panels, even though it is in simple versions,” he admits. He also added that energy consciousness is very important to explain from an early age. “Our Earth is getting older, the ozone layer is getting thinner. To reap the solution in the future, the next generation needs to be introduced about energy as early as possible,” he explained.

In addition, this activity is also an introduction of ITS Eco Campus to external parties. “Electric vehicles are more environmentally friendly than oil-fueled vehicles, this is in line with the tagline  of ITS Eco Campus,” he added. Besides introducing PUI-SKO flagship works, the participants were also invited to take on the tour inside ITS using Electric Bus. One of the participants, Ardan, admitted that he was very happy when traveling around with Electric Bus. “The electric car is new to me and it is good. Ordinary cars in the road release so many “blacky smoke” and I don’t like it. If you do not use an electric car, then the car will be covered up by smoke in all parts,” said Ardan innocently.