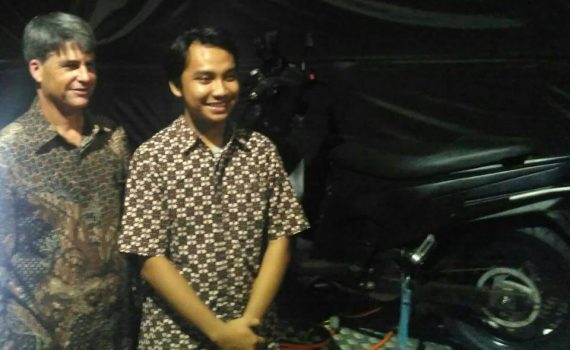 Surabaya – US Ambassador for Indonesia, Brian McFeeters, praised ITS-made electric car and motorcycle while visiting two ITS lecturers who received a Partnerships for Enhanced Engagement in Research (PEER) at Gedung Rektorat ITS Surabaya on Tuesday.

Brian McFeeters came not only to visit the lecturer, but he also took the time to visit the workshop of Mobil Listrik Nasional (Molina) of ITS to see their electric cars and motorcycle.

“This is incredible. I hope the Indonesian technology will continue to advance through ITS,” as he praised the ITS Rector Prof. Joni Hermana. In fact, McFeeters hoped that both products can be commercialized. “I have to take pictures here (in front of the electric motorcycle and car), so if it is commercialized later and success,  then I have taken a photo with these two legends inside the picture,” he joked.

He hoped that the results of research conducted by the academic community of ITS, including the research in PEER program can be utilized for the greater national interest and can be commercialized at the same time. Two studies that received the PEER 2016 Program are research on “Proses Sidementasi Bengawan” Solo by Dr. Ria Asih A. Soemitro M.Eng et al and research on “Permodelan Cuaca Ekstrim” by Dr. Heri Kuswanto. Each of them earned US$200 thousand of research funding.

ITS chancellor Prof. Joni Hermana said that through the PEER program as it is right now, ITS wants to build research networks with several universities in America, as well as seeking experience by collaborating on some researches. “We hope this research will deliver ITS to the world class university,” he said. PEER is a funding program through a selection process that provides support for scientists from 63 countries in order to get research funds that addressed to the development of their country.

In Indonesia, the program enhances the benefits of joint research between US-funded scientists and Indonesian scientists to conduct a research that will contribute to Indonesia’s development. The five previous PEER program proposals have provided approximately US$ 2.6 million for Indonesian researchers.

In 2016, PEER provided funding for six studies that addressed mitigation problem of climate change, infectious disease, and science education which bring the total number of research funded in Indonesia to 43 researches. The United States is delighted to support a partnership between American and Indonesian researchers who answered the important challenges on health, environmental, and other field of studies. “The joint research will find a breakthrough solutions by utilizing science, technology and innovation in order to achieve the greater development of Indonesia,” said Brian McFeeters.